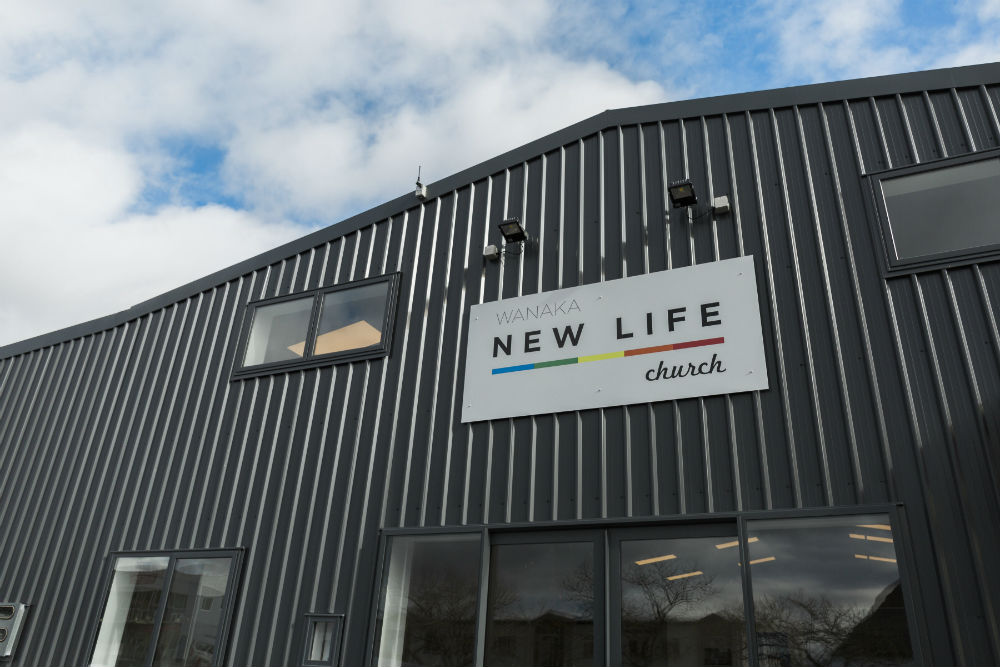 After 40 years of meeting as a church in all sorts of interesting rooms, halls and vacant shops Wanaka New Life Church has finally found a much needed place to establish a church building to accommodate the various meetings worship and ministries available and planned.

In recent years as the church has grown it became harder to find a reliable place to gather for worship and hold Sunday school at the same time.

There were many ideas on how to solve this problem and much prayer was put into seeking God’s wisdom on where we should establish. The Church Trust already owned the old Church Manse in Beech Street as an asset. With the need for a place to hold services and meetings clearly greater than the need for a manse, the decision was made to sell the Manse when ever God revealed the right property.

So in May 2013 while viewing another property for possible rent as a temp church building a very interesting thing happened. All of the trustees present at that first viewing were of the same opinion very quickly that this was the best building we had seen and it was in the best possible location for us as a church, it felt right. The question was asked if it was for sale? It wasn’t on the market however the agent suggested the owner might considering selling.

The agent got back to us with a yes it was for sale and a price. Prior to a special trust meeting all Trustees were told the price and asked to pray about a counter offer that we would consider and make. Amazingly everyone came to that meeting adamant we should pay the asking price in full subject only to our conditions. The contract was signed and returned. Little did we know that had we not accepted that price and signed the owner had someone prepared to lease and we would have lost the opportunity completely.

This is amazing when considered in context with part of a prophecy delivered by Pastor Mark Billings in September 2009 over the church.

“I would believe God would put on your heart, is to have a church of influence in the place of the planting of the Lord. And God is wanting to place that influence not (only) in His body but in His house and He wants to make a statement and I believe that God is drawing you out and wanting to bring you out of the hidden place and bring you into the open square and the market square and the market place. And I believe and I see in the days to come God establishing you and planting you a place of permanency within the place of Wanaka. And I see this as a focal point not in a sense hidden away in the back streets but somewhere hidden away, a, brought forth into the open town square as it were. But in your heart of hearts you’ve said but how can this be so because this is just far beyond where we can go and what we can do.

“But I sense that in the days to come, God is just going to bring for you a sense of alignment and it is a timing issue here because I believe there is some of this that will confirm what’s the vision already in your hearts, some of it will be by revelation, but God is going to just cause those things to align and there is going to come a season where you are going to sense the wave of God’s Spirit and the sense of God’s favour. And at that time you are going to have to be really men and women of faith and be bold and go to those ones because God is going to show you clearly where to build His house. I sense that when the season comes it’s going to be a short window of opportunity and you’re going to have to know with assurity that this is the word of the Lord. This is the word that God has spoken and as you move forth in accordance with that, that which seems hopeless, that which seems closed, that which seems but impregnable, God will open the way and it will be like opening of His double doors before Him. God’s going to give you favour with men of business. God is going to provision you and resource you for that time.”

June 2013 we had just purchased “The Mediterranean Market” building in the heart of the commercial/retail area of town 50 Reece Crescent. We certainly only had a very short window of opportunity and God true to His Word placed us literally in the market place.

When the date to actually pay for the building came we had not yet sold the manse. Again with only 3 days to go we knew that the building owner would not be granting us an extension, however everyone involved felt sure this was the place God had provided for us. Then from completely left field someone kindly offered to pay for bridging finance so we could close the deal and secure the building. Building now secure and a contract to sell the Manse meant we could begin planning the refit, which would be a major task to bring a tin shed up to current fire and insulation standards.

There are no upcoming events at this time.